Mario's Early Years! Fun with Letters is a Mario-themed educational game and is intended to teach the basics of the English language to young children. The game gives the player the option to play either as Mario or Princess Toadstool. Which character is chosen does not affect gameplay at all, and is purely a matter of personal taste. The player controls the character indirectly by moving a cursor over the screen. By clicking somewhere on the screen, the player can make the character move to that spot. Clicking on an object will make the character interact with the object.

The game begins on a selection screen, from which every world is accessible. The screen shows a view of the ocean and an archipelago of seven islands with various objects on top, representing the seven worlds of the game. On the bottom screen there is a raft carrying the three playable characters. The player can switch between characters here. 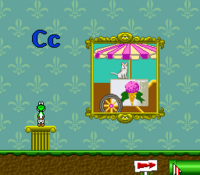 The player is shown the alphabet in Alphabet World.

Each world in the game presents a specific task to the player. These tasks range from filling in words to complete sentences, finding words that contain a specific sound, or aligning three objects that start with the same letter. The player usually has to pick the correct solution out of three or four options in order to complete the task. Each world features different rooms accessible through pipes, presenting slightly varying options and tasks to the player. Each task can be played in two different ways. They can either experiment freely with the given options, or they can wake up the sleeping Luigi in each room by clicking on him, who will then watch the player's actions. If Luigi is awake, he will compliment every right decision the player makes, and sometimes other characters will show up. Giving a certain amount of right answers makes the player advance to the next room, and eventually clear the world. However, since the game keeps no record of completed tasks, this does not serve any purpose.

Copy the code below into your web page